Learning to Surrender – Birthing For His Glory

When I was pregnant with my first baby, the idea of having a God-centered birth never even crossed my mind.The questions I received were more geared towards what my doctor thought or what my nursery colors were going to be.

The idea of preparing for labor and birth by looking at God and the Bible seemed so foreign. It seemed as though my faith and my birth were not related at all.Being a Christian did not really factor into any choices I made for my birth.

It was not until my second pregnancy that God really took ahold of my heart and revealed to me how much pregnancy and birth were an example of His character and His love.

Surrendering to the contractions allowed God to take on the sting of each one and strengthen me to endure a long labor with His supernatural courage and peace.

Birth is hard. Birth is intense. Birth can be long,  but birth is a perfect picture of our need for God.

We hear the horror stories, we see the movies. And as Christians we know that the punishment for Eve’s sin was increasing pain in childbirth (Gen. 3:16). What does this actually mean?

The word “pain” is also the same Hebrew word that was used for work in the previous verse referring to Adam’s work being increased. It is not that now Eve is cursed to give birth, it was already a part of God’s design, just as Adam was already told by God to care for the ground before the fall. Now Adam’s work is more difficult, just as Eve’s is. The intensity of the work grew, but it did not make it undoable.

We are now dependent upon God through labor.

Our culture tells us to fear the pain, fear the work. Our bodies were created to go through this work of birth. The intensity did not increase as a curse, but rather as a consequence for being disobedient to God. Just as any hardship in life, God uses labor to draw us nearer to Him.

Any experience that we are not familiar with can be overwhelming and scary. If you are placed in a driver’s seat and told to drive down the road, you may feel completely overwhelmed and fearful if you are a ten year old who has never driven before.

It would be even worse if you were a ten year old who had never driven and only heard from those around you how completely scary it is.

Of course you would be overwhelmed. Driving a car can be scary.

If you receive the proper education, talk to those who have been through it, and prepare yourself the best you can, the task of driving becomes a lot less scary.  Although you still have not driven before, you are informed and educated and have a healthy perspective on what driving will be like.

Preparing for birth with a Biblical focus is so important to growing in intimacy with Christ.   This is a sacred time, one filled with many changes. God has such a beautiful story for your birth; He will teach you so many things about yourself and, most importantly, about Him. 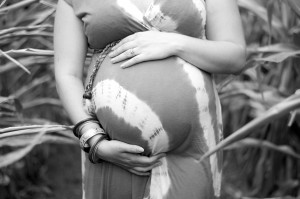