It was April Fools, a Monday night, around 8pm and my husband was putting our 2 year old daughter to bed. I was 40 w and 6 days pregnant. I went to lay down in bed and rest myself when as soon as I laid down, I felt my water break. Not a gush but more of a trickle and I just knew what was happening because this was the same way my labor started with our daughter Nora. When I stood up out of bed and went to the bathroom to be sure I kept having gushes of water come out. I let Jordon know and then called my midwife to let her know, this was around 8:15pm. Jordon and I decided to head to the birth center because we thought things would move quicker the second time around. We would soon find out we were wrong! My dad stayed the night at our house to be with our daughter and I thought we would even be back sometime the next morning. We also wanted my mom and sister there for support, so they each met us at the birth center.

We got to the birth center around 9pm and got settled in. I started antibiotics around 10pm for GBS+ (they recommend 2 doses before the birth…you get the antibiotics every 4 hours. I was disappointed to have antibiotics and have Milo receiving them through me but after talking with my midwifes we didn’t want to take a chance on him contracting GBS so we decided to do the antibiotics). My midwife recommended that Jordon and I lay down and try and sleep until my contractions started so that we could get as much rest as possible. (my contractions started 6 hours after my water breaking with Nora and she was born 6 hours later so I assumed they would be starting anytime!). We got to sleep around 11 or so and then I woke up at 2 when my midwife came in to give me the next dose of antibiotics. After being awoken, I had trouble getting back to sleep. I was uncomfortable from being in a wet depends from my water continuing to leak so I kept going to the bathroom and being somewhat anxious with the anticipation of when labor would truly begin. I fell back asleep around 4 or so for a few hours and then woke up at 6 when my new midwife on call came on shift (Kimberly, who delivered Nora). When Kimberly arrived at 6 we decided to start trying things to get my contractions to start (they said once I could get into active labor things would move quick!). My midwife also checked to see if I had made any progress with dilating. I was about a 4, which is where I had been for the week leading up to this. Jordon and I went for a 30 minute walk and did some curb walking and squatting.

He read me Scripture and birth affirmations I had wrote down to help me during labor. We prayed and talked about how excited we were to meet our son. We came back in to the birth center and I used the breast pump for 20 minutes and they gave me some herbs known to help strengthen contractions. We kept this process going for what went on to be most of the day. I stayed hydrated with water and coconut water. We ate a good lunch- turkey sandwiches and I would snack here and there. It wasn’t too hot but I was getting warm on our walks out in the sun. We went up and down stairs and continued to curb walk and squat. I would get into a pattern on our walks of feeling contractions every 2 minutes or so that would last 30 seconds (they weren’t super strong to where I had to stop walking for the most part, but very recognizable). As soon as we would come inside from the walk, my contractions would completely stop. I began to get so discouraged and confused because I had not anticipated having to work so hard to get contractions to start the second time around. Around 2pm we decided I would try drinking a castor oil milk shake. That’s another thing the midwives will try to get labor moving along. Since I was GBS+ they usually have about a 24 hours time frame for the birth center where they would like to see me in at least active labor before 24 hours since my water broke. Throughout the day I was really missing Nora too. I had not anticipated being away from her for so long and I really wanted to see her. I thought she might be a good distraction to take my mind off things and for everything to just feel more “normal”, so my dad came to the birth center with her and she got to hang out with us for a bit and did some stair stepping with me. I was so glad I got to have her there for part of Milo’s birth day.

Around 4pm I broke down crying because I felt like our birth plan was not going to work out the way we had hoped and prayed for. I requested to have my midwife check to see if I had made any progress and I was still a 4, no change. It looked like I may have to transfer to the hospital for a little pitocin to see if that would help push my body into active labor. Jordon really was suggesting to me that he thought I needed to lay down and just rest. We had tried everything else and I had really been exhausting myself, so he really felt we should do the opposite and just relax. I agreed, so I took a shower to relax and my mom was going to pick up some dinner for us so that we could eat a meal before heading to the hospital. Jordon was so incredible at pointing me to Christ when I felt so defeated and thought our plans were completely changing. My husband has truly be a rock throughout both our labors together and I am always so overjoyed to see how God has gifted him with such trust for the birthing process.

Around 6pm I went to lay down by myself and take a nap in the room where Nora was born.

I had a good sob and prayed, giving my plans and hopes to God knowing that He knew exactly how Milo needed to be born and that in the end all that mattered is that he was here and we were both healthy. I felt like God was just asking me if I would trust Him if things looked much different then we pictured and to not let fear overcome me.

Just as I finished crying and praying, the strongest contraction came over me at 6:15pm and I could not help but moan through it. I knew after the first contraction that he was coming & quick!! My sister heard me and came into the room and also got Jordon. I told them he was going to be born here! Things moved really quickly. I could not get comfortable in any position, I was constantly moving from the bed, to the tub, to the bathroom. I would wrap my arms around Jordon’s neck and let him hold up all my weight for the contractions. My sister would squeeze my hips and was an amazing comfort to me telling me I could do it and everything was gonna be okay. My husband, sister and mom were amazing at recognizing needs I couldn’t even recognize for myself.  My contractions were strong and steady and I could feel a lot of pressure.

I labored on the toilet backwards for a while and that was the most comfortable place for me. I believe I hit transition around 7:00pm and started feeling the urge to push. I didn’t want to move to the bed so we stayed in the bathroom and I sat in Jordon’s lap and began to push around 7:15. Milo was born at 7:35pm and it was a moment I will never forget seeing him for the first time. Instant unconditional love and my heart was forever bound to this precious baby! He had so much vernix and looked so tiny to me! He also looked sooo much like daughter, they are little twins 2 years apart! He wasn’t so tiny after all, just 1 ounce smaller then Nora was. He was 8lbs 2oz and 20.75″ long.

Whether or not anything would have gone according to our plans, God was merciful and gracious to us in the birth of our son.

He has showed me during each labor that I truly must surrender all my hopes and desires to Him. It is hard for us to let go of the idea that we can control the outcome and experience of our birth, but just like every detail and part of life, God is the One in control and orchestrating it all.

This lesson from labor is also something I need a constant reminder of in motherhood. God is sovereign over my children’s lives, that is a scary and comforting thought at the same time. I don’t have control over my children’s salvation but also thank God for that because I am a messy, sinful human just like them. All I can do is be faithful to be the wife and mom God has called me to be. Nothing has ever exposed my need for Christ the way that motherhood has and I am thankful for that. 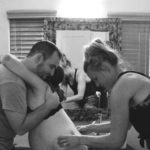 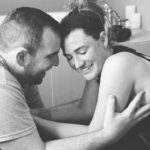 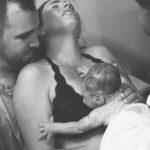 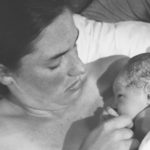